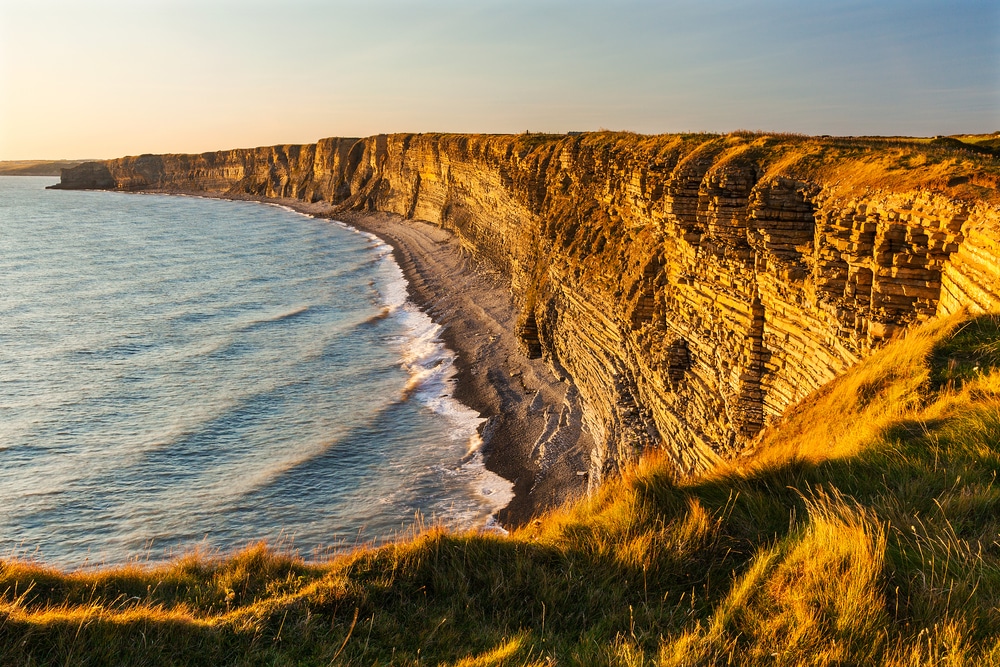 Get to know the route, points of interest and surrounding area of the Vale of Glamorgan.

Around Mile 20 in the VOGUM 40 miler, You’ll want to take in the sweet floral smells of local family business, Boverton Nurseries, before heading into the historic manors of Gileston and Aberthaw. This area is filled with little inlets, lagoons, sea cliffs, sand dunes, and the River Thaw. One of the main standouts is the Aberthaw Power Station, which can be seen from miles away. When first opened in 1963, Aberthaw was the most advanced power station in the world. The station still churns out between 5,000 to 6,000 tons of coal on any given day.

This area also played part as a defensive outpost during the Second World War. Limpert Bay’s defenses formed part of the Western Command’s coast “crust” defenses for the Vale of Glamorgan. Defenses included; anti-tank cubes, pill boxes and an anti-tank ditch. One of the highlights in the area is the popular Grade II listed Blue Anchor Inn. The Inn dates to the year 1380, and although it’s had a few scares along the way, the Inn is still standing!

Once passed the sea cliffs, Athletes are treated with a run along the Aberthaw Nature Walk and right passed the Fontygary Leisure Park into the most southerly settlement of mainland Wales, Rhoose. The beach here is completely rocky with little to no sand and teamed up with dangerous currents as well. Luckily the VOGUM doesn’t make a pit-stop here for a dip, but instead heads further east up the coast passed the Mile 27 mark in Porthkerry. The views inland towards Porthkerry Country Park can be some of the best views along the course. The park is equipped with nature trails, picnic areas, a cafe and all anyone needs to get by on a sunny day in South Wales.

Barry Island and Beyond

Mile 28 sees Athletes coming into the sixth largest town in Wales, lovely Barry. Once again history hits us with the Barry Docks, which at one time was the largest coal port in the world. This is a much-needed shakeup for all Athletes, as the course jumps through some cool locations with lots to see around Barry Island. The course stays just atop the island and will see Athletes briefly off the Wales Coast Path (Mile 29 – Mile 33) for just a bit.

Once back onto the Wales Coast Path, Athletes will pass through Lavernock Point Battery, yet another World War II defensive site. Originally built in the 1860’s to protect the ports of the Seven Estuary, it was then replaced by a new anti-aircraft battery during the Second World War. The Point also played a part in the first wireless signal across open water, dating back to May 13th, 1897.

Lavernock sees Athletes onwards with the 1760’s St. Lawrence Church and then north towards the derelict ROC Post in Penarth. The Royal Observer Corps Monitoring Post was constructed in the 1950’s midst the Cold War to report any nuclear findings. With 1,563 posts built during this period in the UK, most lie derelict and abandoned like the one in Penarth.

The last little bit of the course shows Athletes spectacular views of the Bristol Channel and local sea cliffs that take your breath away. From the sea, Athletes take a left turn through a few side roads and on into Cosmeston Country Park. The local nature reserve is a haven for local wildlife, with horses, dogs and birds being seen daily. This part in the VOGUM is important to cherish for all Athletes. This is Mile 39 and will have the last little bit of nature and green before the course heads towards St Cyres School for the finish.

This Is The End… My Only Friend, The End

Congratulations and Welcome to Mile 40! The lovely St Cyres School will play host to our Post-Run Venue. The venue will be equipped with; restrooms, showers, indoor space, hydration, snacks, outdoor sports field, sponsor booths, free parking, scheduled masseuse, post-run yoga, music and good times. We at Pegasus want to make the VOGUM journey one to remember, so thank you and we hope to see you on June 2nd!